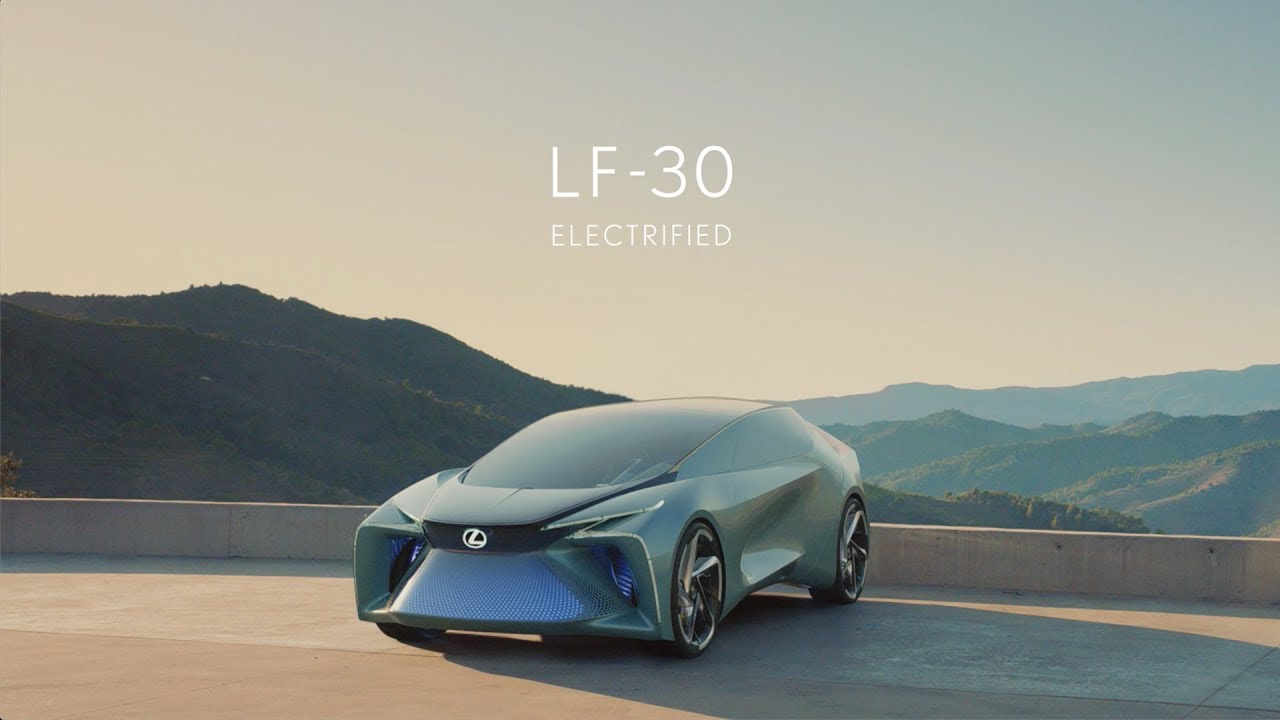 Its technology enables integrated control of the powertrain, steering, suspension and brakes to provide the ideal vehicle posture in each situation, including provision of front, rear and all-wheel drive as required.

The LF-30 Electrified will be followed next month by the first production Lexus BEV, broadening the company’s response to the needs of various regions around the world.

The luxury lifestyle brand says it will further expand its electrified vehicle line-up “early in the coming decade” with the first Lexus plug-in hybrid and a new dedicated BEV platform.

It will broaden its response to the needs of various regions around the world, including the development of EVs utilising hybrid, plug-in hybrid, battery and fuel-cell technologies.

The Lexus LF-30 Electrified concept – designed at the ED2 European Design Centre in France – derives its name from this year’s celebration of the Lexus brand’s global 30th anniversary and the glimpse it provides of the Lexus Future for electrified vehicles.

The show car fundamentally transforms the essence of luxury vehicles with its tantalising peek towards the technology of 2030 with its futuristic design, newly designed cockpit, steer-by-wire system and autonomous driving technologies.

It is designed to deliver a dynamic experience unlike any currently available with in-wheel electric motors and maximum outputs of 400kW and 700Nm and a 0-100 km/h acceleration time of just 3.8 seconds. Performance is rooted in Lexus Electrified components, adding the brand’s latest technologies to its leadership in development of hybrid-electric vehicle systems.

Precise electric motor control enables instantaneous adjustments to posture not possible with conventional vehicles. Furthermore, the LF-30 Electrified employs numerous advanced technologies with a look-ahead to the year 2030 – such as a new-concept cockpit based on a human-centred design philosophy and a steer-by-wire system.

In taking up the challenge of expressing a new design that could only be achieved with a BEV powered by in-wheel electric motors, Lexus visually articulated the unique energy flow of the LF-30 Electrified. The vehicle form is meant to visually express the energy created by the wheels set at the corners of the vehicle body streaming toward the vehicle cabin and past the driver to directly flow onto the road surface.

Taking advantage of a bonnet-less vehicle shape made possible by being a BEV, the signature Lexus “spindle” form has been further evolved to span the entire vehicle architecture. Window glass that stretches continuously from the front to rear, muscular fenders and wing-shaped headlights combine to form the contours of the Lexus iconic spindle. The body shape is fashioned with an elegantly flowing front that transitions into a linear and sharp rear. In addition to the headlights, the sharpness of the rear lights and side air intakes combine to achieve excellent aerodynamics and cooling performance, resulting in styling fused with function.

The opacity of the side windows can be freely adjusted, providing occupants with expansive views of the surrounding scenery and a high level of privacy when desired. The colour of the front face of the vehicle and luminescence patterns help identify from the outside whether the vehicle is being operated in its normal mode or in its autonomous driving mode, reflecting the Lexus pursuit of high-level styling and functionality. The exterior ‘voltaic sky’ colour employs a leading-edge metal-infused coating to achieve a unique quality tinted by a touch of blue-green.

The cockpit design is based on the new Lexus concept of “Tazuna”, a Japanese word for “reins”. Inspired by how a single rein can be used to achieve mutual understanding between horse and rider, the steering controller-mounted switches and head-up display have been co-ordinated to a high degree. The driver is therefore able to focus on driving while controlling various functions, such as the navigation and audio system and driving-mode selection, without having to shift their vision or operate manual switches.

As an indication of the future image of a Tazuna cockpit, the LF-30 Electrified employs next-generation interfaces, such as gesture control and enhanced presentation of vehicle information through augmented reality (AR). The resulting interior is one that provides comfort and convenience for both driver and passengers.

With the layout of the front passenger seat echoing that of a first-class seat on an aeroplane, the interior is one in which a sense of openness and a sense of envelopment coexist. Comfort and convenience extend to all switches and controls being comfortably within reach while a gesture-control large-screen display is provided for the passenger.

The rear seats use artificial muscle technology to mould to their occupant, and can support various modes such as reclining, relaxation and alert functions. A Mark Levinson® audio system creates a next-generation listening environment, in which minute speaker control establishes ideal acoustic spaces for music listening pleasure for the driver and each passenger. Headrest speakers provide an optimal audio environment and have a noise-cancelling feature that contributes to enhanced quietness.

A glass roof above the rear seats features voice control and a gesture-controlled “SkyGate” display window that uses AR to display various types of information, such as a realistic star-filled sky, user-favourite videos, and even navigation.

In addition to its unique design, the interior also indicates the direction of next-generation luxury by using sustainable materials to reduce environmental burden. Yakisugi (charred cedar), a traditional Japanese material, is used in the floor and steering controller while recycled metal was processed into fibres for use in creating the pleated door trim. This approach expresses typical Lexus distinctiveness and innovative spirit. A dynamic experience unlike any currently available

To achieve a fundamental leap in vehicle performance, handling, control and driver enjoyment, the LF-30 employs numerous state-of-the-art technologies even beyond advanced posture control. In-wheel electric motors for each of the vehicle’s four wheels and low positioning of the battery enable better handling of inertia and high-level driving performance. Autonomous driving technologies and drone support vehicle technologies look ahead to the year 2030 and the widely expanded value that vehicles can offer.

Lexus Advanced Posture Control technology regulates the drive-power output from high-torque electric motors to adjust vehicle posture in tune with human sensibilities. Completely independent control of front and rear drive wheels allows appropriate provision of front-wheel drive, rear-wheel drive, and all-wheel drive, depending on the driving situation. Compact and lightweight drive-power units expand freedom in vehicle packaging and are used to enable the driver to enjoy ideal driving, regardless of the road surface or driving conditions.

Positioning Lexus Advanced Posture Control technology as a core element of the Lexus LF-30 Electrified vision, Lexus intends to widely apply this technology throughout its line-up of electrified vehicles.

The steer-by-wire system eliminates a mechanical connection to allow more flexible turning control depending on driving conditions, and a more precise steering feel aligned with the driver’s intention. It also contributes to a greater sense of openness by allowing the steering controller to be shifted forward and out of the way during autonomous driving.

As a next-generation BEV, LF-30 uses wireless charging technology to simplify daily charging, and artificial intelligence (AI)-based energy management to enable optimal distribution of electric power to both the vehicle and the home, and charging control coordinated with the user’s daily schedule.

Onboard AI distinguishes the voices of vehicle occupants. It uses personalised information stored on the driver’s control key to serve as a partner. It facilitates the adjustment of elements of the interior environment, such as air temperature and audio, and the setting of navigation routes and destinations, while also making proposals for activities after arrival. It also understands driver’s preferences and helps them control the suspension and powertrain settings in real-time according to the driving scene.

The LF-30 Electrified also carries the ‘Lexus Airporter’ drone-technology support vehicle. Using autonomous control, the Lexus Airporter is capable of such tasks as independently transporting baggage from a household doorstep to the vehicle’s luggage area.

Added high-level convenience is provided by a self-parking system and a front-door pick-up where the LF-30 Electrified autonomously moves from driveway to doorstep. The future of Lexus

Explore the future of Lexus.